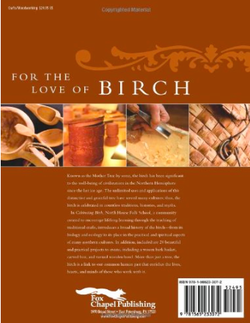 A Gathering of Spoons, American Association of Woodturners by Norman Stevens http://www.normsartorius.com/images/Spoon%20Catalog66web-1.pdf
http://www.amazon.com/Gathering-Spoons-Design-Gallery-Stunning/dp/1610351304

Celebrating Birch: The Lore and Craft of an Ancient Tree
http://www.amazon.com/Celebrating-Birch-Lore-Craft-Ancient/dp/1565233077

I have followed a long and scenic road to get where I am now.  I was born in Massachusetts to German immigrant parents in 1961.   I was drawn to woodworking in junior high through the need to make my own skateboards.  I bought a table saw and router when I was 14 from the hardware store where I worked.  I started learning carpentry as a profession in 1984 and found myself working on more than a few 18th century homes.  During this period, I attended the Boston Architectural Center where I slowly began to learn about traditional building and woodworking trades.

In 1988, life brought me to the Twin Cities where one of my two sisters was already living.  I joined the Midwest tool collectors at a tool swap meet held at Murphey's Landing in Shakopee.  I cobbled together a costume, back story and sets of tools to volunteer as an interpreter on weekends.  One summer day as I was acting as the itinerant village carpenter, a giant redheaded hippie with a small boy in tow told me he made windsor chairs on a spring pole lathe.  Having no idea what that meant, but knowing that sounded so cool, I suggested he join us.  He did and we became fast friends.  Not long into our friendship, he showed me how to carve a spoon in the Swedish style, told me about Wille Sundqvist and opened my eyes to Swedish carving techniques.  I never looked back.

In 1996, I traveled to Micronesia and lived on the island of Saipan for two years.  There, I carved unusual species of wood and had the opportunity to work on a Carolinian dugout canoe.  Also, I studied Balinese Mask carving.  My experiences opened me up to new possibilities and techniques.

As I was going along with life and career, I felt a constant struggle between traditional and modern ways: hand tools and power tools.  I realized both methods are valid, and rather than fight against each other, they can in fact support each other.  The struggle between hand work and power tools evolved into a working partnership: the ancient and modern world working together.  Now, after many classes, formal and informal, with master craftspeople from all over scandinavia and some in my own backyard, here I am.